At its peak in the mid-19th century, whaling was a gigantic, global business that provided oil to light the streets and homes of Europe and America, and bone to make profitable consumer goods for sale around the world. The young United States dominated this industry, and for a time, whaling was the fifth largest sector of the American economy.

While stories of whaling drama, adventure, and violence are typically set at sea, this map aims to communicate the economic impact of whaling back in American ports, where sperm oil, whale oil, and whalebone landed and entered the market. For over 60 port cities and towns, this map reports the market values of whale products as they were returned to port from 1804 to 1876, illustrating the drastic ebbs and flows of the industry. 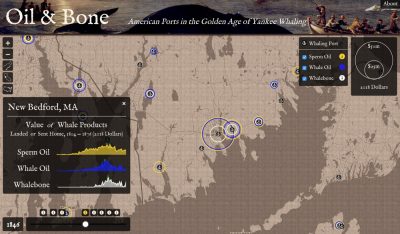 Interact with the map at www.kgmaps.com/oil-and-bone

Quantitative data on sperm oil, whale oil, and whalebone arriving in port are aggregated from the American Offshore Whaling Voyages Database hosted online at whalinghistory.org. Whale product values are derived from Alexander Starbuck’s History of the American Whale Fishery, published in 1878, which includes average annual prices of each product from 1804 to 1876 (hence the temporal scope of the map). All dollar values have been translated to 2018 dollars using Consumer Price Index estimates published by the Federal Reserve Bank of Minneapolis.

The historical narratives and background information supplementing the map are drawn from Leviathan: The History of Whaling in America, by Eric Jay Dolin.