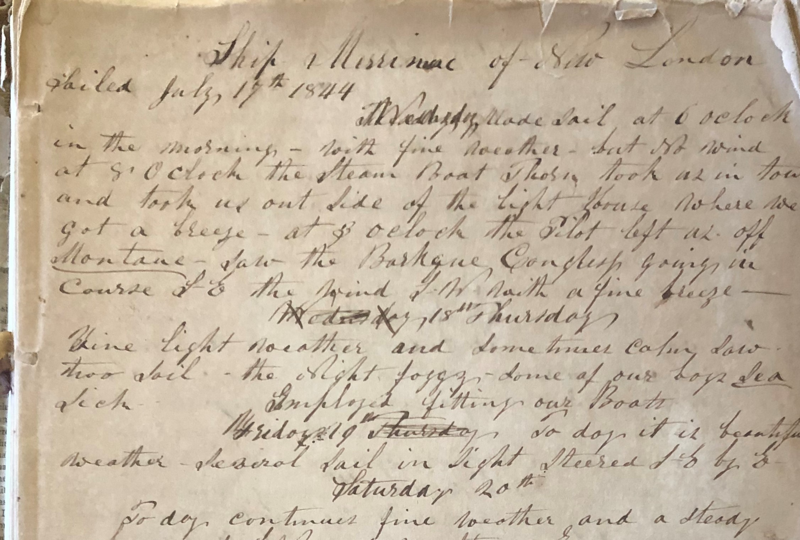 When the Journal arrived at the Custom House in August 2020, it was examined by Susan Tamulevich, Executive Director, and Laurie Deredita, librarian, who noted its fragile condition. Despite the temptation to start reading it, they decided that it would be prudent to handle the manuscript as little as possible. After an article appeared in the Day of New London, it became clear that there was a lot of local interest in this New London-based whaling journal and that it would be useful to have a transcription of the pages publicly available. To this end, Susan took photographs of each of the pages so that a transcriber could work from the images rather than the pages themselves.  Eventually, it was decided to “crowdsource” the task of transcribing to volunteer “scriveners.” With the Custom House closed during the COVID-19 pandemic, it seemed like the perfect project for people interested in maritime history but stuck at home. All of the sending, receiving and editing of documents would take place electronically.

Susan’s call for volunteers received local and national media attention and she was nearly overwhelmed with responses from people all over the country and abroad who wanted to try their hand at transcribing. In early January 2021 she began to send out the page assignments and instructions to the volunteers.  Within days, Laurie started receiving the completed transcriptions from the volunteers and she began to post the texts, side-by-side with the corresponding photographed pages from the manuscript, on an online website called Voyage of the Whaler Merrimac, created on the Omeka platform. By February 2021 the transcription part of the project was complete but the editing process took another two months until we decided  that it was good enough.